A Guide to Dimmable LED Panel Lights for Home

A Guide to Dimmable LED Panel Lights for Home

Mains dimming is a familiar method for the dimmable LED panel light, as it is commonly used in homes. Mains dimmers are often rotating and can replace light switches on the wall. They have a knob that people can turn counterclockwise or clockwise to decrease or increase the light output, and press to turn the light on and off.

The light is off and on in full power, but less lighting is delivered altogether when compared to if it had been around the entire time. Since our eyes cannot process the quick switching, our mind interprets this as a continuous, dimmed light source.

As for LED panel lights for home, the power from the mains consistently appears as a waveform with a frequency of 50Hz. This means that the wave repeats 50 times per second. Because the current from the mains changes alternately, each cycle switches from positive to negative, so there are 100 current cycles per second: 50 positives and 50 negatives. Mains dimming is achieved by turning off the power twice in each wave and once in each current cycle.

When LED drivers are switched on for the first time, they consume a great number of current for a very short time, until the built-in capacitors have been charged. This is called "in-rush". This doesn't alter the total energy consumption in any way, so the dimmable LED panel light continues to be highly energy-saving, but it does mean that a dimmer will 'see' them as using a high wattage.

As a result, the power rating of LED light dimmers is reduced for use with LED panel lights for home. This means that although the dimmer may show a rated power of 400W, the LED dimming rating may be 100W. Therefore, be sure to check and follow the manufacturer's LED dimming level. 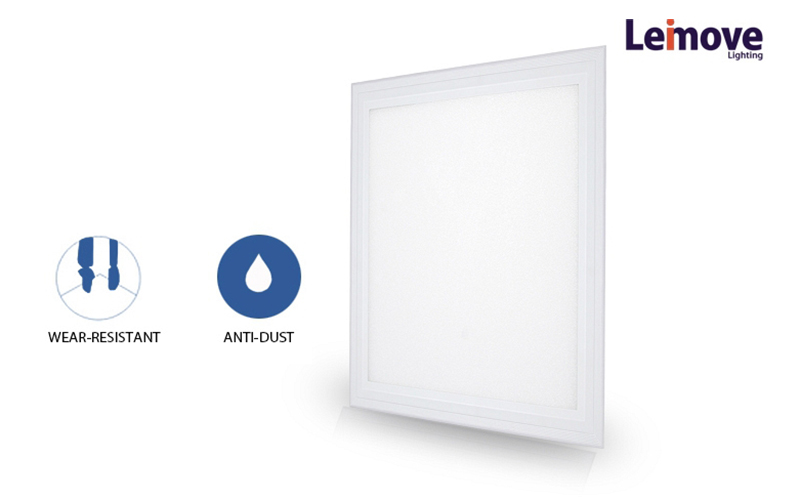 Advantages and disadvantages of mains dimming

Capacity - The amount of LED panel lights for home which may be dimmed in a group is limited by the dimming capacity of this LED dimmer. By way of example, the maximum load of a 300W dimmer is 300W LED. Thus, this dimmer can dim around seven seven-watt 40W LED panels.

Compatibility - Not all power dimmers are compatible with LED drivers, therefore it is always best to check with a suitable, compatible dimmer supplier for LED drivers of the dimmable LED panel light.

Unlike mains dimming, this dimming method for LED panel lights for home sends a digital message to the driver, who then dims the lamp with its electronic parts. In low-voltage dimming, what all of the dimmers do is telling the drivers what to do. This differs to mains dimming, because the mains dimmer itself reduces the electricity and sends it via the driver.

Since the dimmers in low-voltage dimming don't do the job but rather tell the drivers exactly what to do, they utilize protocols, which is an agreed manner of transmitting data. The most common protocols for the dimmable LED panel light are DALI and 1-10V/0-10V. However, for the purposes of the guide, we'll discuss just 1-10V/0-10V, which is the type most likely to be seen in LED panel lights for home.

Please note the comparison between 1-10V dimming and 0-10V dimming shown in the table below:

Capacity - The current output from 0/1-10V drivers onto the dimming cables of LED panel lights for home is normally 0.1mA and the theoretical ability of the dimmer is 50mA. This implies that in theory 500 such motorists may be controlled by one dimmer.

Compatibility - There's hardly a compatibility problem between any 0/1-10V drivers and 0/1-10V dimmers for the dimmable LED panel light.

Installation - This system requires additional wiring. Therefore, on the one hand, the installation cost may be higher than that of other systems (i.e. mains dimmable), on the other hand, the necessity to hiding this extra wiring may make LED panel lights for home not easy to install.